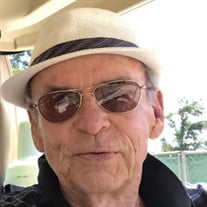 Benn Bjarne Barnas, age 83 of Miami, Florida, died at home of natural causes on April 1, 2021. Benn was the son of Edvin A. Barnas and Ellen L. Berg Barnas, born in Traskbole, Finland, December 12, 1937. He had a tumultuous childhood in Finland during WWII because the country had been occupied by both the Russians and the Germans and his father had moved to the United States before the war hoping to earn enough money to relocate his family there. His mother also went to the U.S. on and off during this period requiring Benn and his older brother Bengt to be separated and passed around to various relatives who did not always appreciate the extra mouths to feed during such difficult economic times. He did not make it to the U.S. until 1949 where, at the age of 12, he quickly assimilated to his new home. Benn attended Anacostia High School in Washington, D.C. and upon reaching the age of 18 appeared before a judge at the Post Office Building in Washington to seek U.S. citizenship. He was already a citizen by virtue of his parents having achieved citizenship before he had entered the country but he wanted to earn it for himself. As it turned out, this was a fortuitous event because it provided him with documents he would later need to earn a commission in the U.S. Army. After graduating high school, Benn worked for 3 years at General Electric repairing phone dials, but working side-by-side with men much older than himself he realized that the position held no future. He then sold vacuum cleaners door to door for a period of time until making what he said was the best decision of his life - enlisting in the Army. Scoring 98% on his entrance aptitude test allowed him to enlist in pilot training school and by 1963 he was flying transport planes in Vietnam. Though he didn’t voluntarily offer stories of his service there ,when prompted he would speak of harrowing missions of tree-topping flights in and out of hostile territory and returning many times with his planes riddled with bullet holes. In 1966, Benn left the Army and began a position as a 727 flight engineer for Pan American Airlines. His future assignments would have him living in San Francisco, New York, Miami and Berlin, Germany and flying “right seat” on 747’s, a position he later resigned in favor of being a Captain of the 727. When Pan Am went out of business in 1991, Benn realized that he had enough money to retire so long as he did not get married and divorced for a third time! He determined after two brief and unsuccessful marriages as a young man that he was meant to be a terminal bachelor, and that is the path he chose and stayed on for the rest of his life. Having already “seen the world” as a pilot, Benn’s retirement plan was to become either a boater or to work on bettering his 30 handicap as a golfer. The decision was made for him when a friend invited him to join Riviera Country Club in Coral Gables, FL, and it was there he enjoyed his retirement years where he regarded himself to be “the luckiest man in the world” considering his humble beginnings. It was at Riviera where he eventually became a low, single-digit handicapper shooting his age starting at age 68. For those who know golf, they also know what an amazing accomplishment that is for an amateur golfer. Known for having a beautifully smooth golf swing, he was often approached at the range for swing advice, something he handed out freely and which brought him great joy. Benn was incredibly kind and generous to those he loved and he will be fondly remembered and greatly missed. He was preceded in death by his older brother Bengt Borje Barnas, and is survived by a sister, Betty S. Barnas, sister-in-law Grace Barnas, nephews Ken Barnas and his wife Luanne, Rick Barnas and his wife Nancy, and Rob Barnas and his wife Connie, niece Kathy Barnas, and 14 grand and great-grand nephews and nieces. Memorial service will be held on Saturday, July 10, 2021 from 1:00 pm - 4:00 pm at Ferdinand Funeral Home. Memorial contributions in Benn’s name may be made to the Wounded Warriors Project at www.woundedwarriorproject.org.

Benn Bjarne Barnas, age 83 of Miami, Florida, died at home of natural causes on April 1, 2021. Benn was the son of Edvin A. Barnas and Ellen L. Berg Barnas, born in Traskbole, Finland, December 12, 1937. He had a tumultuous childhood in... View Obituary & Service Information

The family of Benn Bjarne Barnas created this Life Tributes page to make it easy to share your memories.