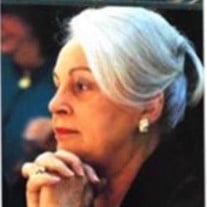 Carmen San Pedro de Dominguez, 87, passed away peacefully into the arms of our Lord on July 5th, 2021, at home, and surrounded by her loving family. Carmen was born in Havana, Cuba on October 18, 1933 to Gerardo San Pedro and Carmen Montoto. She attended Merici Academy, and graduated from El Conservatorio de Musica Carlos Alfredo Peyrellade as a first class pianist. At the age of 15, she met Manuel (Manolo) Dominguez, the love of her life, at the Biltmore Country Club. They married in 1953, when she was only 19 and he 24. In 1960, they left Cuba with their three young children and began a new life. They initially settled in Surfside and later moved to Coral Gables. During the early years of exile, Carmen was a piano teacher and taught kindergarten at St. Joseph's Catholic School in Surfside. Eventually, she left teaching to devote herself to helping her husband run their business, West Indies Food & Packing, Inc. They became life partners in every way. Their lifelong love and devotion to each other would form the cornerstone of the life and family they built and rebuilt together from Havana to Miami. Together they cultivated a love of music, opera and the arts. They traveled the world together. Her faith and her appreciation for the difficulties of raising a family in exile, led her to join Sister Margarita Miranda in the creation of a program for immigrant youth. She was one of the founders of Centro Mater which still flourishes today. She was a voracious reader, a musician and an artist. She was a Cordon Bleu chef and her orchid garden was award winning. Carmen will be remembered for her courage and strength, her faith and love of family, her sharp wit and her easy laughter. She was one of a kind. She is survived by her husband, Manuel (Manolo) Dominguez; three children, Maria Carmen (Michel de Vallois), Maria Teresa (Jose Angel Chamorro), Manuel Jr. (Maite de Zarraga); her nine grandchildren, Roberto (Genevieve Rosenthal), Paola (Andrew Avarbock), Teresa Maria, Gillian Maria (John Slick), Gabriella, Alessandra (Patxi Diaz), Carolina (John Dolan), Sofia (Chris Perez Tirse), Manuel III; and her five great grandchildren, Sebastian and Oliver, Olivia and Noah, and Parker Rose. A mass for the eternal rest of her soul will be celebrated at St. Augustine Catholic Church on Friday, July 9, 2021, at 1:30 p.m. In lieu of flowers the family kindly requests donations in memory of Carmen Dominguez to: Centro Mater Child Care Center at https://centromater.com/en/ or https://donatenow.networkforgood.org/1408801

Carmen San Pedro de Dominguez, 87, passed away peacefully into the arms of our Lord on July 5th, 2021, at home, and surrounded by her loving family. Carmen was born in Havana, Cuba on October 18, 1933 to Gerardo San Pedro and Carmen Montoto.... View Obituary & Service Information

The family of Carmen R. Dominguez created this Life Tributes page to make it easy to share your memories.