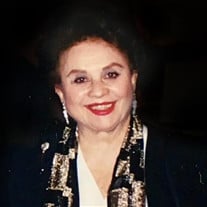 Concepcion Yebra Suarez – in Memoriam Concepción Z. (“Conchita”) Yebra Suárez, was born on 11th October 1928, in the city of Holguín, Cuba. Her father, Delfín Yebra Proenza, was a practicing physician, and later won a seat in Cuba’s parliament, representing a constituency in his hometown, and participating in the drafting of the country’s seminal constitution of 1940. Conchita’s mother, Isabel Suárez HomdeDeu, was the scion of a Catalan family in Cuba, whose patriarch was involved in Cuba’s war of independence (1895 - 1898). Conchita was predeceased by her brother Julio Antonio, who as a young medical student, was executed by a Castro firing squad after a brief trial, in January 1961. In the mid-1950s, Conchita married one of Cuba’s leading entrepreneurs, Jesús Manzarbeitia Gurruchaga, the largest importer of spirits into the country. The couple welcomed a son, Cosme, in February 1959. With the increasing radicalization of the Cuban Revolution, the family subsequently fled the island in October 1960, resettling in Madrid, Spain, where Conchita’s husband leveraged his extensive contacts in the global spirits industry, and established a distributor in Spain, for Canada’s largest distiller of whiskies, Seagrams. During their early years in Madrid, Conchita and her husband became very influential in the nascent Cuban community there, presiding at a restaurant/ club in Madrid’s barrio de Salamanca, that served as a meeting point, for the dissidents, entertainers and writers, of a growing diaspora. After nearly 40 years in Spain, Conchita moved to the US, settling in Miami’s Dadeland area. She continued to indulge her epicurean interests, and passion for travel, until well into her eighties. Always avant-garde, and with an engaging and vivacious demeanor, Conchita continued to energize and inspire those around her, throughout her life. Conchita is survived by her devoted and loving son, transplant surgeon Cosme Manzarbeitia MD, his wife Joann, and grandsons Aaron Joseph and Robert Daniel. A mass of Christian remembrance will be held at St. Augustine Catholic Church in Coral Gables, on Thursday, March 5th, 2020 at 1:30pm, followed by Inurnment at Woodlawn Park South.

The family of Concepcion Zenaida Yebra created this Life Tributes page to make it easy to share your memories.

Send flowers to the Yebra family.