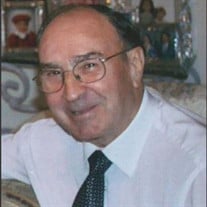 Jesus Larrañaga or “Chucho” as his friends and family called him was born on November 17, 1928 in Etxebarria, Spain. He was the son of Sebastian Larrañaga and Luisa Irastorza, and on Saturday, April 16, 2022 he was reunited with his family in the heavenly kingdom. Chucho left home at the age of 17 to play Jai-Alai professionally. He rose to great heights while playing Jai-Alai and won the World Championship of Cesta Punta several times in his career. His skill in the sport allowed him to travel and play in many countries such as Spain, Mexico, Cuba, France and the United States as fronton general managers around the world were eager to secure his playing contract. Chucho was loved by Jai-Alai fans around the world, as they were amazed by his talent and grace on the “cancha”, but also appreciated and respected his good-natured and humble demeanor off the court. While playing in Mexico he married for the first time, and had a loving daughter, who was the apple of his eye. Chucho met his second wife while playing in Cuba and they ultimately settled in Miami, Florida in 1974 after years in Spain. He had a daughter and son from this marriage. He adored his children and would always offer his support, counsel or just a sympathetic ear when needed. Once his playing days were over, Chucho began working at Southeast Bank in Miami, Florida. His unofficial role was as the mayor of the bank as all the clients and employees would love hearing his stories about his playing days or his famous “chistes” which had many a listener rolling on the floor with laugher. He was a man who never cursed but would say an occasional dirty word if the chiste called for it. Chucho never lost his competitive spirit and quickly turned his ambitions to competitive trap and skeet shooting. Once again he was routinely winning tournaments well into his 80’s against much younger competition. He was always up for a friendly arm wrestle or any other challenge presented to him. In his later years, Chucho found walking as a therapeutic physical activity and in that arena too, Chucho made friends with all he met. His friends at Tropical Park would always stop by to say hello to him and celebrate his birthdays. He always had a soft spot for animals and small children who were always drawn to him. Chucho was loved by all his friends and he in turn was always concerned about the well being of others. He would be the first to offer sympathies or just to call his friends to see how they were doing. Chucho was a man who was loved by all. He will be missed by his wife Julia Lecuona Larrañaga and his three children: Maite Del Carmen Larrañaga Otero, Julia Arrizabalaga and Jesus Larrañaga; his son-in-laws Carlos Pedro Santos-Burgoa Zarnecki and Markel Arrizabalaga; his grandchildren Carlos Daniel Santos Burgoa Larrañaga, Diego Santos Burgoa Larrañaga (his wife - Greta Alvarez), Lorena Santos Burgoa Larrañaga (her husband - Erick Bravo Jimenez), Amanda Arrizabalaga and Andrea Arrizabalaga; as well as his great grandchildren Iker Matias Santos Burgoa Alvarez, Lena Greta Santos Burgoa Alvarez, Sabina Bravo Santos Burgoa and Emilia Bravo Santos Burgoa; and his sister-in-laws Lourdes Lecuona Tremols and Rita Lecuona Infante. https://www.diariovasco.com/deportes/pelota/fallece-anos-txutxo-20220418213947-nt.html

Jesus Larrañaga or &#8220;Chucho&#8221; as his friends and family called him was born on November 17, 1928 in Etxebarria, Spain. He was the son of Sebastian Larrañaga and Luisa Irastorza, and on Saturday, April 16, 2022 he was reunited with... View Obituary & Service Information

The family of Jesus Larrañaga created this Life Tributes page to make it easy to share your memories.

Jesus Larra&#241;aga or “Chucho” as his friends and family called...

Send flowers to the Larrañaga family.