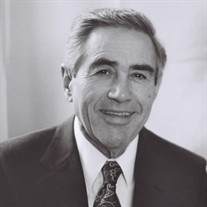 Beloved Dr. Jose Roger Sosa passed away in his sleep at the age of 97 on Friday, May 13, 2022 after a brief and courageous battle with cancer. Roger, as he was called by family and friends is survived by his four sons, three nieces/nephews, nine grandchildren, six great-nephews and nieces and many friends. Roger lived to 97 with all his considerable mental faculties intact. He came to this country with nothing and made a good life for himself and his family. He was a hard-working, self-directed man with high standards and a huge love of family. Roger knew everyone by name and treated everyone with respect, (except for the errant golf ball). He had more than his fair share of his life, which is something to celebrate. Jose Roger Sosa was born in Cartagena, Cuba on August 8, 1924, delivered at home by a midwife. At eight years of age his mother died and his circumstances changed dramatically for the worse. However, with the help of caring relatives he overcame the challenges he faced and achieved a teaching degree. By placing in the top three out of thousands of applicants, in two different regional certification exams, he was able to secure a job as a teacher. Roger then began to work towards his goal of becoming a physician. He was accepted to the University of Havana Medical School and began the rigorous studies while simultaneously working as a teacher. In medical school, he met Carmen Violeta Sosa, the love of his life. They were married for sixty three years through thick and thin. They raised four boys, built a life for themselves in a new country, travelled, laughed and loved together. In his memoirs, Roger wrote: “she was a beautiful lady, an outstanding mother and wife. I miss her every day, every moment.” Roger and Carmen Violeta came to the U.S. for medical training with nothing in their pockets but hope and hard work. Due to political circumstances and despite an imperfect knowledge of English, they decided to stay. In 1959, they moved to a small town of German ancestry in southern Illinois called Germantown, and Dr. Sosa began his solo practice as a family physician. These Cuban immigrants were welcomed into this small community and eventually beloved. In an eventful and incredibly busy 36-year medical practice, it was estimated that Dr. Sosa cared for over 20,000 individual patients and delivered 5,000 babies. He delivered his last baby in 1995 at the age of 71. Dr. Sosa went on house calls down farm roads in the middle of the night, treated patients who knocked on his door at home with gashes on their heads, and on one occasion was driven to the maternity ward in a snowstorm on a snowmobile by a nervous father-to-be. Over the years, there were hundreds of thank-you notes to Doc Sosa posted in the local paper. When Roger retired in 1995 the town issued a proclamation of September 24-30 to be “Sosa Week”, and held a ceremony in the American Legion Hall. He was also honored by the Illinois Academy of Family Physicians, of which he was an inaugural member. In 1996 Carmen and Roger moved to Miami Beach where they reconnected with old friends and made many new ones. Their apartment was the scene of many family gatherings and happy times. Roger and Carmen travelled extensively to visit family and to South America and Europe. One of Roger’s favorite pastimes was golf and he played often with his buddies and in his later years with his son Rich. In a remarkable stroke of luck and skill, he shot a hole-in-one at the age of 82! This was his first round after a total knee replacement. Roger was a man of many unsuspected talents, among them acting. He was the star of several independent comic videos; his most notable role was as the evil queen in a blonde wig and crown. He was also a word-smith: his memoir ran to 150 pages. When his sons were young, he would tell funny, wildly inventive bedtime stories that might involve Little Red Riding Hood, The Three Little Pigs and The Three Bears all in the same story. Often, these stories communicated his core values of self-respect, respect for others and the power and love of family. Jose Roger Sosa was a highly successful self-made man whom we respected and loved very much and who loved us all with a warm and wise heart.

Beloved Dr. Jose Roger Sosa passed away in his sleep at the age of 97 on Friday, May 13, 2022 after a brief and courageous battle with cancer. Roger, as he was called by family and friends is survived by his four sons, three nieces/nephews,... View Obituary & Service Information

The family of Jose Roger Sosa created this Life Tributes page to make it easy to share your memories.

Beloved Dr. Jose Roger Sosa passed away in his sleep at the age...