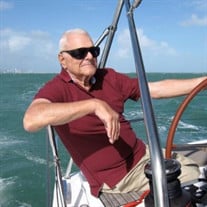 Joseph (Joe/ Pepe) de la Campa passed away peacefully surrounded by his loving family. Born in Havana, Cuba on January 21, 1929, he was married for 59 years to Silvia Estape de la Campa, who pre-deceased him in 2015. Joseph “Pepe” de la Campa was a man in love with the sea who traveled the world, building communities from the ground up and managing projects that would help thousands. From a young age, de la Campa had a connection with the ocean, sailing and racing famous yachts. But after coming to America from Cuba, he began a career in civil engineering, helping and mentoring many. De la Campa, 92, died Saturday. He was a sailor’s sailor and had a wealth of knowledge about the sport, recalled his daughter, Alexandra Villoch, CEO of the Baptist Health South Florida Foundation and former president and publisher of the Miami Herald. In Cuba, he self-taught himself the basics of sailing from a book when he was in his late teens. From there, he found a passion and went on to crew and sail the legendary Cuban yachts Ciclon and Criollo, which took part in many sea races along the U.S. coast, Atlantic and Caribbean in the 1940s and 1950s. He was part of one of the only Cuban crews to win a New York-Bermuda race, his daughter said. He sailed alongside famous racers like Richard Bertram. “My dad lived a ‘bigger than life’ life,” Villoch said. “He would always laugh that he retired first. He sailed in his 20s until he went to marry my mother at 30, and at that point he went to work.” He married Silvia Estapé de la Campa, who loved to travel the world and was one of National Airlines’ first Cuban flight attendants. She passed away in 2015. In 1960, de la Campa was part of the first waves of Cuban migrants to come to Miami. With a degree in civil engineering from the University of Havana and connections from his sailings days, he began working toward a life in construction. “It was that story of this generation of folks that were immigrants to Miami from Cuba that came and started with nothing,” Villoch said. Like many, he began his career small but went on to be a project manager and work on head-turning construction projects around the world. In Puerto Rico, he built the Arecibo Radio Telescope for Cornell University. He was involved in the building of a hydroelectric dam that fueled Guatemala City. He went to Peru to build the Cuajone Copper Mine and Smelter complex, which also involved building a surrounding city. For the Saudi royal family, he built an airport in Jeddah. “I’ve lost track of all the different projects that he did across the world, everywhere from Korea to Indonesia to Malaysia to the Dominican Republic to Venezuela,” Villoch said. His vast construction expertise led him to be president of Rust International and vice president of Fluor Daniel, Kellogg/Rust International and Procon/UOP International. Apart from sailing and construction, family was very important to de la Campa. Villoch said he would teach her the tools of his trade and take her to job sites, reminding her that she could do anything. “My father always told me everything was possible,” Villoch said. “Nothing was off limits to me....” In his later life, after retiring from construction, de la Campa returned to sailing in a more leisurely way than in his race-fueled younger years. In addition to Villoch and son-in-law Cesar E. Mendoza, he is survived by son Gabriel de la Campa, as well as granddaughters Danielle M. Villoch and Victoria de la Campa, and great granddaughters Felicity and Bonnie Mendoza. Mass will be held at 10 a.m. Tuesday at St. Augustine Catholic Church, 1400 Miller Rd., Coral Gables, followed by a burial at Our Lady of Mercy Cemetery, 11411 NW 25th St. In lieu of flowers, please consider a donation in his memory to be made to Miami Cancer Institute/Research & Innovation Fund/ Baptist Health Foundation in honor of Dr. Peter Citron who took incredible care (6855 Red Road, Coral Gables, Fla 33143)

The family of Joseph de la Campa created this Life Tributes page to make it easy to share your memories.