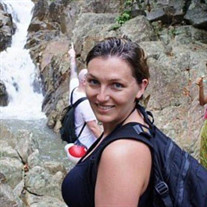 LIVINGSTON, McKenzie Ann., 41, born in Boynton Beach, Florida, passed away on March 17, 2020. Private Cremation Services. McKenzie Ann Livingston was born on July 9, 1978 and her life was anything but ordinary. While McKenzie earned impressive degrees, pursued a career in law, and received many professional accolades, she was never someone who wanted to be defined by those things. McKenzie was the life of the party and she can make any situation better just by being there. She could turn on ‘lawyer mode’ in the blink of an eye if you were trying to mess with someone she cared about. She could handle the stress of a corporate, legal position without losing perspective on what was really important in life. She truly believed and lived the philosophy of live and let live. She lived without judgment of others. Most importantly, McKenzie believed in enjoying life with all its colors, textures, people, and flavors. She was her happiest while traveling the world with Tom, her husband, high school sweetheart, best friend, and partner in crime. They would spend their trips searching out the tiniest shack in the middle of nowhere to try the local delicacy. They were also known for bringing back crazy stories from their travels. There was one time in Thailand when McKenzie crashed her scooter rental and injured her leg. Tom carried her away and worried over her, as he always did. She professed to feel fine the next day, not wanting to miss their hike into the jungle. In the end, she wound up in a Thai hospital a few days later with nothing less than gangrene! She loved to tell that story not because it impressed others, but because it gave her the chance to laugh at herself and marvel at what can happen when we choose to leave our comfort zone. When she wasn’t traveling the world, she adored cuddling at home with her hairless cat, Enso, either playing video games with Tom, reading another YA novel or enjoying Tom’s culinary creations. McKenzie was terrible at emailing and messaging friends and family – and she never checked her voicemails – but when you needed her, she always showed up. She showed up in the ways and in the moments that mattered. Anyone who was lucky enough to meet her could tell you a “McKenzie” story. She brought people together with her light, laughter, and love for life. And that is what she will be remembered for. McKenzie left this world far too soon, but she made the most of her 41 years on this earth. Her memory will be carried on by her husband, Tom, who, for the last 26 years was never far from her side; parents, Kathleen Petracco & Thomas Livingston; stepparents, Jane Livingston & Peter Petracco; siblings, Peter A. Petracco, Patty Livingston Dumach, Tennille L. Willey, and Carly Petracco; and all of her cousins, nieces and nephews, in-laws, friends around the world, and those who were privileged enough to spend time with her. If you would like to memorialize McKenzie, we recommend pouring yourself a large glass of your favorite drink and then making a generous donation to one of the following organizations: ASPCA of Miami, Planned Parenthood, Fullbright Association, or The International Law Association.

The family of McKenzie Ann Livingston created this Life Tributes page to make it easy to share your memories.

Send flowers to the Livingston family.