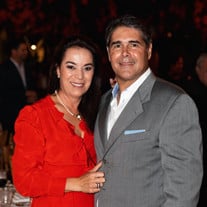 Richard G. Rovirosa and Maria Teresa Rovirosa January 23 – June 24, 2021 Miami Beach, Florida – Richard and Maria Teresa Rovirosa passed away on June 24, 2021. Richard was born on January 23, 1961 and Maria Teresa was born on January 23, 1963. Twin flames that began and ended their lives together. Born to Francisco and Myriam Rovirosa (now Myriam Roig) in Houston, TX, Richard was raised in Venezuela, El Salvador, and Puerto Rico until the family settled in Miami, FL where he attended St. Brendan High School. After graduating from Loyola University New Orleans, Richard joined the family business participating in the management of the various Rovirosa companies. Born to Lionel and Margarita Montells in Madrid, Spain, Maria Teresa was raised in Madrid until moving to New Jersey as a teenager. The family later settled in Miami, FL where she completed her senior year at Coral Gables Senior High School and Associates degree from Miami-Dade Community College. Maria Teresa worked at Verifone for 15+ years until she went on to dedicate herself to her family. Richard and Maria Teresa met in 1985 and were engaged within 6 months and married the next year on December 13, 1986. They were very family oriented especially when it came to loving and caring for their children and family. They enjoyed life to the fullest: drinking great wines, laughing with family & friends, and traveling the world. Richard and Maria Teresa remained happily married for 30+ years until their passing. They are survived by their two daughters, Alejandra Rovirosa (Alex) and Adriana Rovirosa; Richard's mother, Myriam Roig (Gustavo); his siblings, Ana Maria Alexander (Johnny), Miriam Montalvo (Mandy), Frank Rovirosa (Ana), and Natalia Martinez (Jimmy); Maria Teresa's mother, Margarita Montells; her siblings, Jessica Montells, Lionel Montells, Jose Ignacio Montells, as well as their many nieces & nephews. Celebration of life mass to be held at Epiphany Catholic Church on Friday, July 16th at 11am, visitation beginning at 10am. Please come dressed in your best white attire. In lieu of flowers, donations can be made to either Liga Contra Cancer, https://ligacontraelcancer.org/online-donation-form/; ALS Association Florida Chapter, https://www.als.org/florida/donate; and/or Surfside Relief Fund, https://supportsurfside.org/. There will be a live stream available of the mass: https://youtu.be/3HmG1ZRip1c.

The family of Ricky & Maituca Rovirosa created this Life Tributes page to make it easy to share your memories.