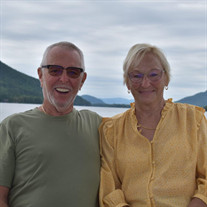 Wayne R. Morris, age 75, passed away on Sunday, January 9, 2022 at Jackson South Medical Center in Miami, FL from Pneumonia. A Celebration of Life Service will be on March 12, 2022 at St Paul’s Lutheran Church in Saratoga Springs, NY at 11am in person. This service is also available live virtually http://www.spalutheran.org/live A private funeral service will be held at The Saratoga National Cemetery. Wayne R. Morris was born in Scranton, PA on March 5, 1946 and the son Doris and Jack Morris. He grew up in Lake Carey, PA enjoying boating and fishing. At age 14, Wayne was introduced to his next door neighbor, Susan Kropa. She quickly became his best friend and high school sweetheart. After his high school graduation, he enlisted in the United States Navy as an aircraft mechanic and air traffic controller. Wayne’s entrepreneurial spirit began in the Navy where he sewed and loaned money with interest for extra money. On December 16, 1967 he married his high school sweetheart Susan Kropa. After completing his 4-year commitment in the Navy, he returned to Tunkhannock PA to start his family and begin an hourly production job with Proctor & Gamble. Between 1969 and 1975 he had two beautiful daughters and was consistently being promoted at work. He was offered a managerial position with P&G and transferred to their facility in Albany, GA. Wayne defined hard work and ambition and was actively sought after by companies within the paper industry. In 1975 he was offered a career advancing position with Georgia Pacific in Plattsburgh, NY. In 1978 he was scouted again, and accepted a Plant Manager position with Erving Paper in Brattleboro, VT. During his time with Erving Paper, Wayne also earned his Associated Degree in Business management. In 1986, American Tissue pursued Wayne to become their Plant Manager at their Saratoga Springs, NY facility. In 1987, after a 22-year career in mechanics and paper converting, Wayne and his wife Susan made the decision to start their own business and created Morcon (Morris Converting) in Cambridge, NY to produce napkin, towel and tissue products. Wayne was a trusted businessperson known for his hard work, relationships and versatile converting. He served the paper industry with a rare passion. After 27 years of owning Morcon and 46 years in the industry Wayne and Susan sold Morcon and began their retirement in October of 2013. Although Wayne was a workhorse, he was an incredible husband and father. He dedicated his life to his family and simply enjoyed being with them. Through the years he enjoyed traveling, hunting, fishing, farming, sporting dogs, maple syrup producer, wood working to name a few. Whatever he was interested in he became skilled at. The last 8 years of retirement, he enjoyed the Florida Keys, Greenwich and Lake George, NY creating endless memories with his family. He was a role model, proud husband, father, grandfather (poppy), and friend to all. Wayne was preceded in death by his daughter, Tammara Camp in 2015. He is survived by his wife of 54 years, Susan Morris, daughter and son-in-law Laura and Chris Panarese and his 4 grandchildren, Samantha and Johnathan Panarese, Gus and Lukas Camp. In lieu of flowers, donations may be made in Memory of Wayne R. Morris to St. Paul’s Lutheran Church, 149 Lake Ave, Saratoga Springs, NY 12866.

The family of Wayne R. Morris created this Life Tributes page to make it easy to share your memories.